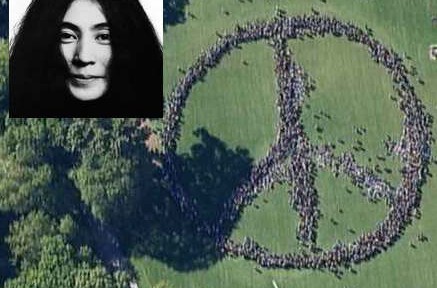 The woman famous for being the wife of John Lennon, Yoko Ono, set out to rally enough people to Central Park to set a world record for largest peace sign, but sadly she failed.

Ono was not asking people to support her cause over ‘giving peace a chance,’ but rather, the world record attempt was aimed at honoring Lennon on what would have been his 75th birthday Friday. A Guinness World Records representative says Tuesday’s effort brought together more than 2,000 people. But Guinness said 5,000 or more needed to turn out for an official record. Lennon was assassinated in 1980 at his apartment building on Manhattan’s west side just across from the park. fox32chicago

The crowd included everyone from Beatles fans to Imagine lovers, some of which we not even born during Lennon’s life time.