Woman Learns The Hard Way, You Can’t Reason With A Bear 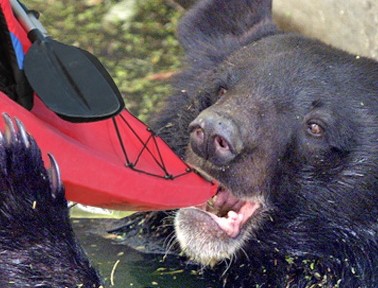 Some are calling this kayaking woman trying to reason with a black bear, the new “double rainbow” video, but others are calling her actions “plain dumb.”

In the video, the woman, (who incidentally has the world’s most annoying voice,) tries to hilariously talk down the bear from destroying her kayak, this while attempting to pepper spray him. FROM VIDEO: During a solo kayak trip, intended to go from from Ketchikan, Alaska to Petersburg, Alask, a bear attacked my kayak. This incident occurred outside of a US Forest Service cabin in Berg Bay, Wrangell District, Alaska. I had just carried my tent, food, and all my gear into the cabin to dry while I went on a 4 mile hike that begins just behind the cabin. I heard something outside as I ate my lunch, and well, I never got to go on that hike. This video is taken 5 minutes after the attack began, he continued to gnaw on it for another 5 or 10 after the video ends. Shortly after the bear left and I drug the kayak back to the cabin door step. Then I swam to the S/V anchored in the bay. They did not have their radio on and I feared I would be stranded! The German flagged S/v Caledonia took me and my things to Wrangell where I am trying to repair my kayak now.

Lady, maybe the bear is destroying your kayak because your voice scares all the salmon away.