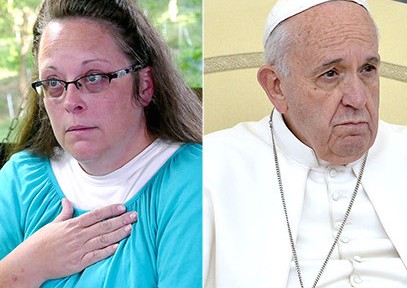 The Vatican is walking back Pope Francis‘ meeting with controversial KY county clerk Kim Davis, by acknowledging their meeting but denying any support for her views.

Davis, the woman jailed for not granting same sex marriage licenses, told reporters the Holy Father met with her during his whirlwind US visit to tell her to “stay strong.” A Vatican spokesman says there were several dozen other people in the room, so Davis was not granted a “real audience” with Pope Francis — and “his meeting with her should not be considered a form of support of her position.” Now the Vatican is saying the meet and greet between the Pontiff and Davis was so brief, the Pope never discussed the details of Davis’ complex situation. h/t tmz

Some are calling out the Pope saying his excuse is akin to “smoked but didn’t inhale.”