Vet Who Claimed Pickup Was Vandalized By BlackLivesMatter Arrested 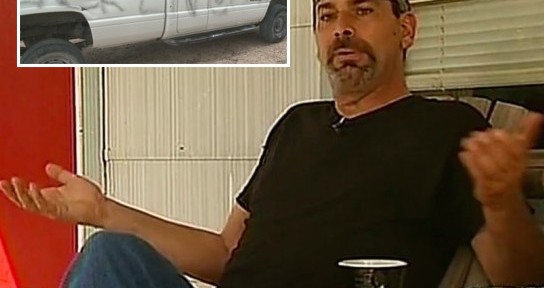 Police arrested Lattin at his home without incident, according to a post on the Whitney Police Department’s Facebook page. He was ordered held in lieu of $2,500 bond. “The investigation is ongoing with additional charges pending,” the Facebook post said. Reports about the vandalism earlier this month sparked an outpouring of donations and support. Donations to an account set up for Lattin and his family on the fundraising GoFundMe website totaled about $6,000 at the time of the arrest Friday and the damaged truck was undergoing repairs at a body shop in the Dallas area whose operators agreed to do the work for free. The family has also received direct cash donations. h/t kwtx

Lattin claimed he painted the pro-law-enforcement message on the truck on the same day as the funeral for Deputy Darren Goforth who was murdered while pumping gas into his patrol unit.