Cop Voids Speeding Ticket After Man Does This 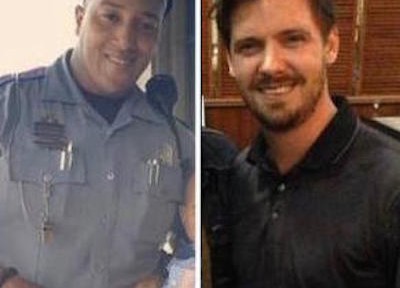 Mississippi state trooper, Jason Ales voided a speeding ticket he had just issued after the man surprised him by asking if he was ‘doing okay’.

Mike Powers from Gallatin, Tenn., asked the trooper the tender question after he had been ticketed, and the officer was so touched, he cut Powers loose. Powers then presented trooper Ales with a hand carved bracelet. A bromance was born. Powers said as he was rushing to make a work appointment last Wednesday in Mississippi, an officer pulled him over for speeding. “The largest officer I’ve ever seen in my life gets out of the car and he comes up to me,” Powers, 27, said. Ales wrote Powers a ticket for driving 25 miles over the speed limit. But Powers said he felt compelled to speak as Trooper Ales started walking away. “I just said ‘How are you doing in light of all the senseless killing around the country?’” Powers said. “‘Are you OK? Are the officers in Mississippi OK?’” The question stopped Trooper Ales in his tracks. He recently spoke to local station WJTV in Jackson. “I was so touched by it, I almost teared up there,” Ales said. h/t wsmv

The wooden bracelet is adorned with the faces of saints and Jesus. Ales hung his new memento in his cruiser. “It’s ahead of me and watching over me and my patrol car at all times,” he said.