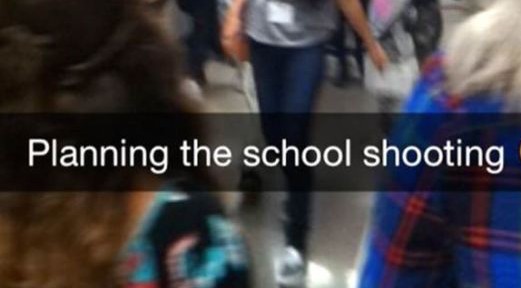 An Arizona teen arrested by police after posting a Snapchat photo of his school hallway with the caption, “planning the school shooting.”

Lucky for the 16-year-old, his name hasn’t been released because he is a minor. The image made it all the way to Colorado where a high school student named Kaylee saved it, automatically notifying the sender. The culprit soon reached out to her and identified himself as a male student who attended Sierra Linda High School in Phoenix. Not taking any chances, Kaylee reported the incident to her resource officer. “I didn’t want to assume it was a joke because if I would have woken up today and seen that he really did shoot up a school, I know how bad I would have felt if I know I could possibly have stopped it,” she said. h/t complex Police have charged the teen with one count of creating a hoax, which is a class 4 felony. He confessed to sending the image but insists it was just a joke. Well, now it looks like the joke’s on you.