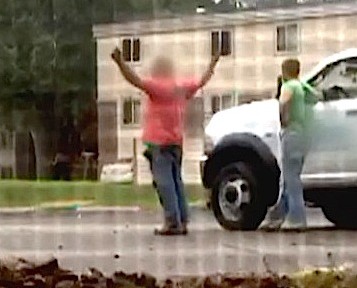 Ferguson police shot a teen, who is said to be a close friend of the late Michael Brown, during a commemoration protest. Cops are saying that Tyrone Harris Jr. was not part of the peaceful protest, rather he was engaged in “criminal activity” when he was shot. He remains in critical condition at a local hospital.

The death of Brown last year brought on a slew of protests in the city as locals and bused-in activists insisted justice was not served. The victim of the latest shooting has been identified as Tyrone Harris Jr., from St. Louis. He is said to be in critical condition in the hospital and many activists say he is fighting for his life. The head of the St. Louis County police, Jon Belmar, told media outlets that a man opened fire on plainclothes detectives on the evening of the protest — Sunday, August 9th, 2015. The man, he said was then pursued and shot by officers. The police chief said the suspect was in a “critical” and “unstable” condition in hospital and undergoing surgery. Belmar added that the suspect had been tracked throughout the protest as police believed he was armed. He said officers told him that the suspect approached the detectives who were sitting in a van and opened fire with a 9mm gun that had been stolen last year. The police chief said none of the officers were seriously injured and that the officers have been placed on administrative leave, in line with standard practice after police-involved shootings. h/t anonhq

Ferguson cops say that Harris Jr. was armed and first opened fire on officers which led to officers returning fire. The incident involved two groups of people and that 40 or 50 shots were fired in an exchange between the two groups.