The Discovery Channel‘s controversial “Eaten Alive” TV show was supposed to show a man being eaten alive by a wild snake, there were just two little problems, the host wasn’t eaten alive and the snake was not from the wild, in other words, it was all a sham.

It has been revealed that the snake used on TV was not a wild snake a touted, it was shipped in from a wrangler. 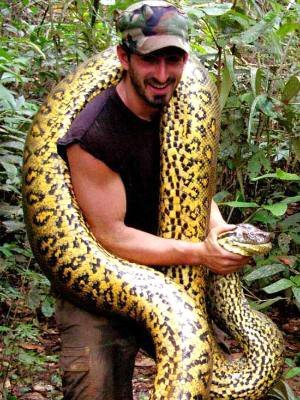 If you missed it, naturalist Paul Rosolie said he was planning to be eaten alive by a 25-foot anaconda, but the stunt failed to live up to the hype since he never entered the snake’s belly.Sources on the production said things started going south when Rosolie couldn’t find and capture a 25-foot snake in the Amazon — so he had to use a ringer — a normally captive snake that was too small to get the job done. Paul ultimately tapped out because the stand-in was still strong enough to rip his arm out of the socket.  h/t tmz

Last week, on TMZ Live Rosolie explained how he survived the pre-taped stunt … by hinting the snake had puked him up — but now it’s obvious that was a lie.