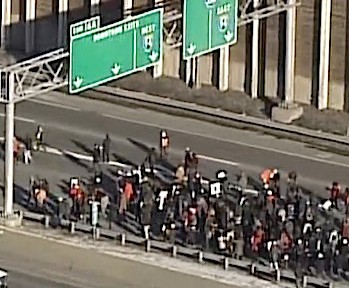 Protesters have shut down a major urban interstate, I-35W In Minneapolis.

Folks protesting in favor of a $15 per hour minimum wage, moved from a local Burger King onto the northbound lanes of I-35W. 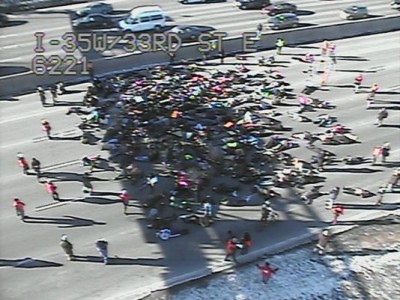 Police shut down the interstate, blocking traffic just short of the ramp. Close to 200 of the protesters massed across all the lanes, holding signs and chanting for what they call “economic justice.”

Shortly after 1:30 p.m. the protesters laid down in the roadway. They then got back on their feet and began marching towards downtown, with squad cars crawling along in a line behind them.

Minneapolis Police also blocked off the intersection of Lake Street and Lagoon around 6 a.m. as an earlier arm of the local protest demonstrated. At this point it is unclear what is behind the response of law enforcement, or if arrests are imminent.