NYPD arrested about a half dozen Ferguson protesters who had headed off their planned route on their way to disrupting the Macy’s Thanksgiving Day Parade.

Raw video from the scene shows the NYPD clashing with a group of protesters after they overturned trash cans and ran toward the parade route. 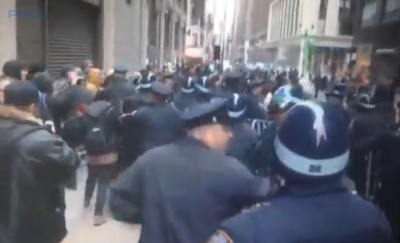 Roughly 50 protesters gathered Thursday morning and were allowed by police to walk from 5th Ave.and 42nd down to 37th street. Once the reached 37th street they were directed to continue west along 37th, but a group tried to turn east toward the Macy’s route. The arrested protesters were loaded onto a police bus and removed. Some protesters were still on the parade route protesting peacefully near 6th Ave. and 37th as of 10:20 a.m. h/t pix11

Protesters organized the gathering using the hashtag #stoptheparade on Twitter. They held signs decrying the Darren Wilson jury decision and the recent deaths of Akai Gurley, Eric Garner and Tamil Brown, all killed by police officers.