Coming in a string of extremism, a man brutally beheaded a woman and then jumped in front of a Farmingdale train.

A moving Long Island Rail Road struck the man in what’s being investigated as a murder-suicide, says N.Y.P.D. 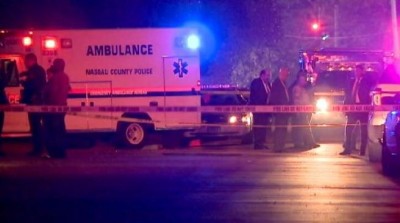 Police found the body of a woman in her 60s outside a Farmingdale apartment complex on Secatogue Avenue Tuesday night – her head was severed.

The body of a man in his 30s, who investigators believe may be the woman’s son, was found stuck to a train about a mile away on a section of LIRR tracks.

Passengers on the train were being loaded onto another train, and will be taken back to another station and bused to their destinations from there, officials said.

The section of the LIRR track is expected to be closed while officials investigate.
Officials say the incident appears to be domestic, and not terror-related.