*UPDATED BELOW* Hazmat teams are on the scene of a chemical leak at the Phillips 66 – Bayway refinery in Linden, New Jersey over the release of ethylaluminum dichloride into the air.

Authorities have ordered a shelter in place in the surrounding area, advising residents to keep their windows shuttered. 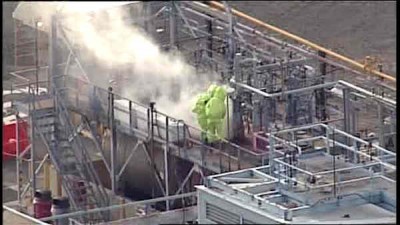 Linden Police indicated the leak was contained, and there is no threat to the immediate area.

Union County Hazmat and firefighters remain on the scene.

A Phillips 66 rep contacted THECOUNT.COM with this late-breaking update:

The release was NOT at the Phillips 66 refinery. It was in a different area of the Bayway Industrial Complex.

This morning at approximately 8:00 a.m. Eastern Time, there was a release within the Infineum area of the Bayway Industrial Complex. Immediately Phillips 66 enacted its emergency response to assist the Infineum responders and a shelter-in-place order was issued within the complex as a precaution. There were no personnel injuries as a result of this release.

Infineum reported that the release was contained and the shelter-in-place was lifted at about 9:50 a.m. ET. Phillips 66 refinery operations were uninterrupted. Infineum is a third party tenant operating within the Bayway Industrial Complex.