A Disney World monorail train was struck by lightning and had to be evacuated Sunday night. 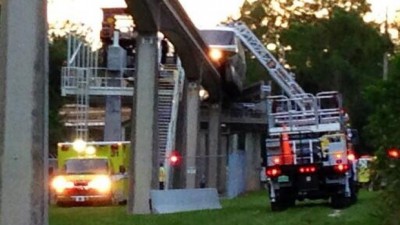 “Literally stuck on a monorail at Disney, lighting struck and we immediately stopped. I’m convinced that I’m going to die,” said Twitter user @nnaaatttalliiie at 6:07 p.m.

“We’re going to have to evacuate the monorail,” @lilymock said. source

WDWNT.com tweeted a photo of the monorail stopped near the Wilderness Lodge with multiple emergency vehicles nearby.

A Disney World spokesperson said there was bad weather in the area at the time but could not confirm if lightning caused the power outage.