Kanye West: Performing On Stage As Dangerous As Going To WAR

Kanye West has amassed himself with other celebrities who have a bad habit of comparing performing to that of being a police officer or even a soldier fighting in a war like Afghanistan.

West arrogantly compared his singing duties to that of a soldier fighting in a war or a police officers’ dangerous tasks. 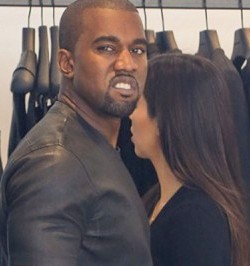 The rapper’s latest comments are even more outrageous, as he compared the danger of performing on stage to a soldier in battle.“I’m putting my life at risk, literally!” West claimed. “When I think about when I’m on the Can’t Tell Me Nothing, and Coldest Winter moment, like that mountain goes really, really high. And if I slipped… You never know. And I think about it. I think about my family and I’m like, wow, this is like being a police officer or something, in war or something.” source

In the past, Kanye has referred to himself as “Yeezus,” which is slang for “Jesus.”