Two Las Vegas metro police officers and another person were reportedly killed Sunday in an ambush at a pizza store that ended up at a Walmart store in the same complex. Details of others involved have not yet been released.

Two shooters, one man and a woman are thought to have killed themselves. 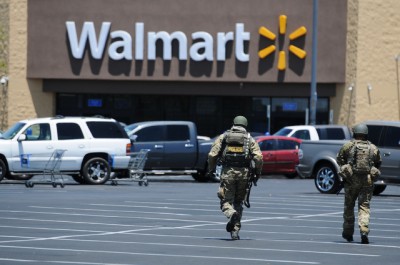 A male shooter, described as a tall white man, yelled “everyone get out” before shooting.

Details are sketchy and police have not yet confirmed the deaths of the officers, but sources within the Las Vegas Police Department say both were shot and killed by a man and a woman who approached them as they at lunch at the CiCi’s Pizza store at 309 N. Nellis Boulevard shortly before 11:38 a.m.

Witnesses told police one yelled “This is the start of a revolution” before shooting the officers. The shooters then stripped the officers of their weapons and ammunition and went into the Walmart at 201 North Nellis.

Witnesses at the scene reported hearing shots fired in quick succession inside the WalMart. source

One unconfirmed report is that the two exchanged gunfire with a citizen who was carrying a concealed weapon, and that one of the shooters was injured. Police confirm that at least one civilian at the Walmart was shot and killed.