A baby born in China with four arms and four legs is in stable condition after doctors in surgically removed the extra limbs. 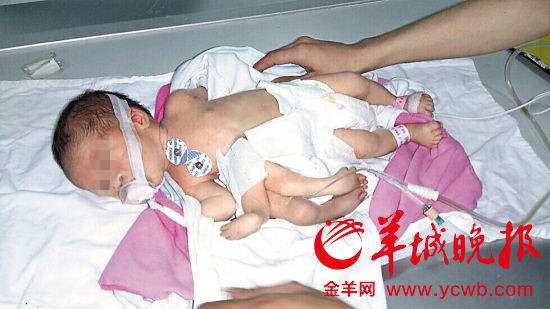 The baby’s father, surnamed Chen, said his wife underwent five routine examinations at local clinics and small hospitals during the pregnancy, all of which revealed nothing abnormal.

The 10-day-old boy, from Huizhou, Guangdong Province, was born joined to a headless parasitic twin joined at the torso on April 2.

“They were supposed to be twins, but one had underdeveloped and became deformed,” said Yu Jiakang, chief surgeon at Guangzhou Women and Children’s Medical Center. source

The infant was also diagnosed with pneumonia and congenital heart disease before surgery.