‘Fappy Bird’ App Creator QUITS ‘It Ruined My Life, So Now I Hate It’

The man who created the wildly popular ‘Fappy Bird’ app, available on iPads and iPods everywhere, is calling it quits even though he is making tens of thousands of dollars a day in advertising revenue. 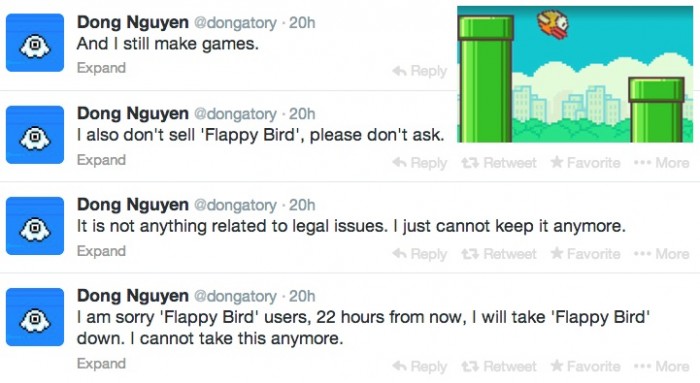 Dong Nguyen tweeted the news earlier that the mobile game will be removed from the App Store today – forever.

In a series of tweets, Nguyen revealed issues with his new found success, “it is not anything related to legal issues”, adding: “I just cannot keep it anymore.”

“I can call ‘Flappy Bird’ is a success of mine. But it also ruins my simple life. So now I hate it.”

Flappy Bird sits at the very tippytop of the App Store garnering nearly 150,000 reviews. Folks of Facebook and Twitter ruteenly share their high scores and strategies.

Nguyen is said to have been earning tens of thousands of dollars per day in ad revenue, but has expressed unease at the attention he has received, tweeting earlier this week: “Press people are overrating the success of my games. It is something I never want. Please give me peace.”

He has also found himself having to deal with accusations that he copied Super Mario Bros visuals for the game.

At last check, Fappy Bird was still available in the iPod app store, 7:11 a.m. pst, so maybe dude had a little chat with his once empty wallet and had a change of heart?