A California woman wired $500,000 to a person claiming to be a single man seeking a date on website ChristianMingle.com. 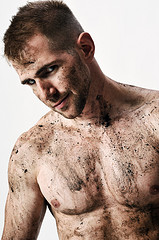 Cops say that the man, posing as “David Holmes,” an Irish citizen working on a Scottish oil rig, plied the 66-year-old woman with gifts, such as flowers and chocolates.

The man used a picture of an oiled-smeared male model on his profile to help convinced the woman to invest $500,000 into the fake oil rig.

She had to dip into her retirement account and refinance her house to afford the payments, FOX NEWS reports.

The scammer was busted when his Skype and email addresses were traced back to Nigeria, Bourlard said.

The woman was able to recover $200,000 she wired to a Turkish bank after receiving help from the Santa Clara County district attorney’s office.

A man named Wisdom Onokpite – an associate of the scammer who entered Turkey using a false passport – was arrested and jailed when he tried to withdraw the funds, Bourlard told the San Jose Mercury News.

The scammer is still at large.