An unidentified 18-year-old man began screaming at Kim Kardashian while the reality starlet scolded him for using inappropriate language in public. 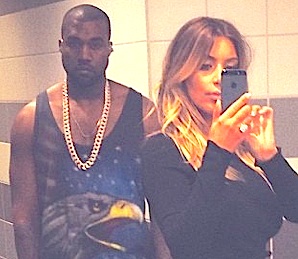 When the reality TV temptress told the man he shouldn’t use the N-word in that context, the man reportedly began screaming at her.
“F–k you b—h. Just trying to help you. Shut up n—-r lover, stupid slut,” he reportedly replied.

Kardashian then watched the guy walk into a chiropractor’s office and later entered with West for a confrontation!

West punched the guy as Kardashian screamed, “We have it all on tape,” witnesses told TMZ.

A massage therapist in the office had to separate the two men.
Beverly Hills Police officers were called to the scene but did not encounter West, cops confirmed Monday.

“Kanye was named as a suspect by the victim as well as witnesses. He had left prior to our arrival, and detectives are currently investigating,” Beverly Hills Police Sgt. George DeMarois told the Daily News.

He said the call for the alleged misdemeanor battery came in at 12:15 p.m.