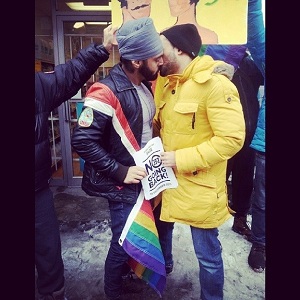 Kanwar Anit Singh Saini, a DJ and producer, posted the snap on Facebook of himself kissing a man at a protest in Toronto against the reinstatement of Section 377 of India’s Penal Code last week by the Supreme Court. Almost 1,500 people had liked the photograph, until Facebook informed him that it “violates our terms and policies”, and the photo was removed it from the page, and they even blocked his account for 12 hours.

A Facebook spokesperson did some furred backtracking: “The photo was mistakenly removed and has been reinstated. We apologize for the inconvenience.”

The original caption on the picture read: “Last night my uncle told me if they knew i was gay before 20 they would have killed me. He also said im gay cause i was molested as a kid and im on “the wrong path”…and when was i getting married? …i laughed and hung up. He comes from the same backwards place a whole minority were just recriminalized … F*ck my uncle. F*ck section 377. Im very proud to be illegal in any context. I owe that to my sikhi heritage and my mom. Also, for all the ranting about genocide i hear…i rarely see solidarity. So…f*ck em all. #sikhknowledge #baagi #377 #section377 xoxox. (all sic)”

Since the photo was reinstated, Singh Saini added: “Sikh Knowledge 1, Facebook 0 … they put it back up. AND I STILL THINK FACEBOOK IS A LOSER .Live. Work. F*ck up the game. Times ticking.”

Protests took place across the world on Sunday including one in London against the Indian Supreme Court’s decision to reinstate a ban on gay sex.