In a cell phone video posted on WorldStarHipHop.com, a woman who was purportedly targeted for an attack manages to counter her attacker’s punch with one of her own. She then turns the attacker on his stomach and starts punching him repeatedly; and is later joined by her boyfriend who lands a flurry of kicks to the attacker’s face! VIDEO: KNOCKOUT KNOCKED OUT! 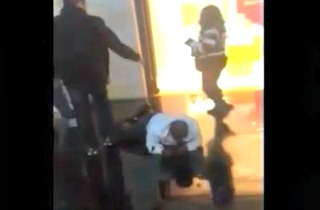