A man who was shopping with his girlfriend leap seven floors to his death after she requested one more look around the mall.. 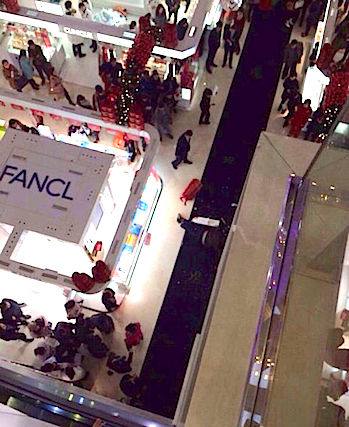 Having been inside the mall for five hours, the man had reached his limit, and reportedly insisted that they leave immediately.

“He told her she already had enough shoes, more shoes that she could wear in a lifetime and it was pointless buying any more,” an eyewitness was quoted as saying. “She started shouting at him accusing him of being a skinflint and of spoiling Christmas, it was a really heated argument.”

Surveillance footage shows Tao angrily hurling the shopping bags and jumping over the railing onto the cosmetics kiosk below.

A spokesman for the shopping center says no one below was injured in December 7 incident, and that the man died instantly upon impact.