Baseball analyst Peter Gammons talking with with Mike Lupica on ESPN radio, was asked about Alex Rodriguez’s behavior lately, which he likened to the Boston marathon bombers.. 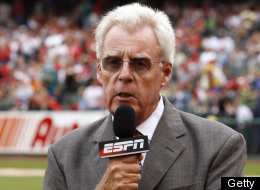 Peter Gammons: I’m not sure I have any answers to it, because it was so crazy. Everybody’s just running after the money, is what it all comes down to.

Mike Lupica: Peter, what’s the endgame here? Because it’s going to be very hard for them to get this thing into federal court. I keep holding out hope for the good of the sport that there is still a deal to be made on this suspension.

Gammons: I don’t know whether—and I’ve had people on the Yankees say this to me. He wants to blow up the world. You know, he’s like the marathon bombers. It’s just, he’s going to get them.

Gammons, apparently realizing what a foolish thing he had said, apologized on Twitter following the radio appearance.