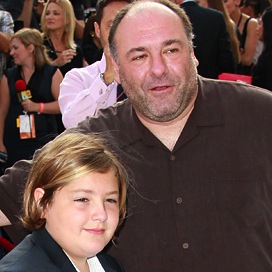 In a comical love film called “Enough Said”, it portrays a divorced woman falling for a divorce man but having to deal with the shenanigans of his ex-wife.

Portrayed by female actress, Julia Louis-Dreyfus (which some of you may remember from “Seinfeld”), the movie premiered at the Toronto International Film Festival on Monday. Followed by applause and emotions, the credits ended with a short monumental phrase: “For Jim.”

Louis-Dreyfus’s costar, James Gandolfini, passed away unexpectantly on June 19 at the early age of 51.

Some may remember him for his outstanding leading role on the hit Television drama, “The Sopranos.” His portrayal of a crime boss struggling to balance family life and his career in the Mafia, has won him three Emmy Awards alone.

Now in his most recent leading role in an upcoming film, Louis-Dreyfus has be reflecting back on her interaction with Gandolfini while filming.

“He was nervous! But as the process began to unfold, he loosened up more and more. He was a little bit nervous maybe not only about the comedy part, but I think he was really questioning whether or not he was the right guy for this part,” Louis-Dreyfus told the Huffington Post. “…But of course, he was perfect for the part. So the fact that he was questioning it made him that much more perfect for the part.”

Despite his uncertainty, Director Nicole Holofcener, told the Christian Science Monitor that she wishes Gandolfini was here to see himself in the movie “because hopefully he would have seen how lovely he is in it.”

This Sunday night on the Emmy Awards, Gandolfini will be receiving a tribute from his “Sopranos” co-star Edie Falco but will be one out of many other TV stars that have left us this year.

The movie releases September 18 so don’t forget to check it out!