George Zimmerman Pulled Over For Speeding Gun On Board (DASHCAM VIDEO)

George Zimmerman was stopped by cops for speeding and that’s when he revealed a gun that was hidden in his glove compartment. 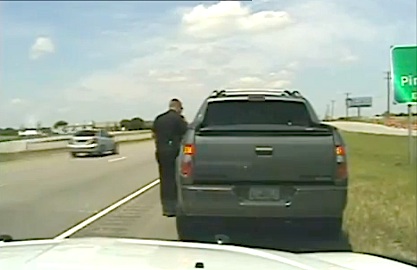 TMZ is reporting, Zimmerman was speeding in Forney, Texas on Sunday when he was stopped by police. Zimmerman told cops he was headed “nowhere in particular,” and informed them he had a firearm in his glove compartment.

Zimmerman was given a warning, after cops determined he was free of warrants. He was sent on his way with a polite goodbye, “Have a safe trip,” but only after asking the cop, “didn’t you see my name?”

Law enforcement told TMZ Z-Man was NOT wearing a disguise.. But he may want to get a new car..