Sour puss Snooki and NJ Gov. Chris Christie came face to face in an awkward exchange on the Seaside Heights boardwalk! The riff goes back to when Christie said publicly that Snooki was not even from New Jersey, which is true.. Snooki was tongue tied.. Because could not say much in protest.. 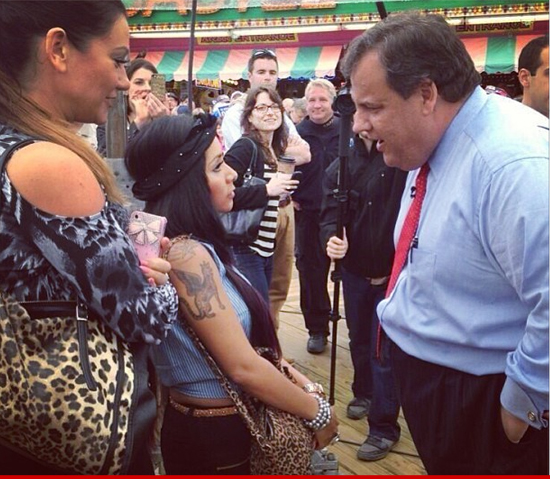 In the video you can hear Christie confirming that the other Jersey Shore cast member did in-fact hail from the Garden State.

After Christie extended a handshake to the “Jersey Shore” star — who was flanked by JWoww and Deena Cortese — Snook tells CC, “I just wanted to meet you, and just, hope you start to like us.” As Snooki walks away, she pulls the “I hate your guts” face … it’s classic. After the encounter, Snook tweeted a photo of the meeting — and wrote, “Getting told why we are bad for jersey. Amazing.” TMZ.

Forget JERSEY! Snooki is not even Italian!