SLAYER Flesh Eating Bacteria Couldn’t Kill Him, But The Drink Did

Hey, I like to have a nice drinkypooh as much as the next guy, but this will give you pause before you decide to drink to excess and on a continual basis.. Slayer guitarist, Jeff Hanneman died from cirrhosis of the liver caused by years of alcohol abuse – and not as a result of his bout with flesh eating bacteria. So what does that tell you? I don’t know either.. 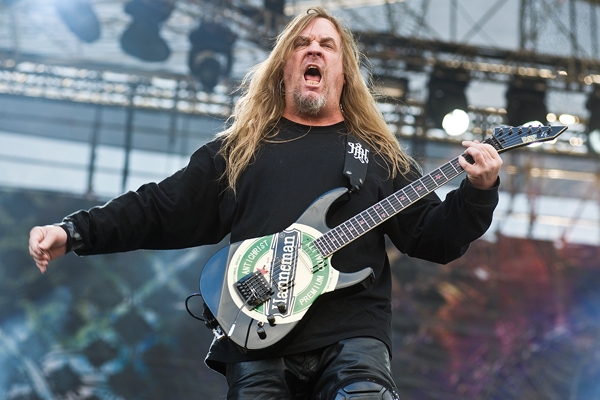 Hanneman contracted necrotizing fasciitis, a flesh-eating disease in early 2011 believed contracted via a spider bite. He fought hard to come back and almost lost his pick playing arm in the process, but the real horror the talented guitarist would ultimately face was the havoc alcohol was playing on his liver..

“While he had his health struggles over the years, including the recent necrotizing fasciitis infection that devastated his well-being, Jeff and those close to him were not aware of the true extent of his liver condition until the last days of his life,” Slayer wrote on their website. “Contrary to some reports, Jeff was not on a transplant list at the time of his passing, or at any time prior to that. In fact, by all accounts, it appeared that he had been improving – he was excited and looking forward to working on a new record.”

The heavy Metal guitar god had been on hiatus from Slayer since his harrowing health scare begun and had been working on physical rehabilitation so he could get back in the saddle again – But that was not to be..

Slayer is planning a memorial celebration for Hanneman for later this month. It’ll be open to the public, and more information will be announced on the band’s website soon.