Shocking news coming out of West Texas after an EMS worker was arrested for “possession of a destructive device,” in connection with that huge explosion that killed 15 people, including three firefighters! And this is the part where it really gets weird, this is the SAME guy who appeared on TV a bunch of times giving details on the blast! He even appeared in a video commemorating the fallen firefighters.. 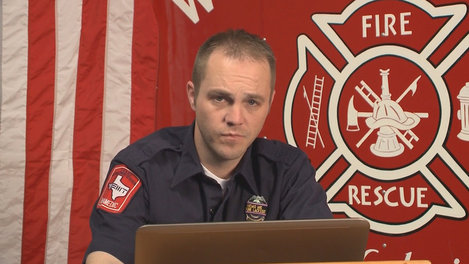 EMS volunteer Bryce Reed gives a video eulogy for Cyrus Reed, one of the firefighters killed in the West blast. Bryce Reed was arrested on May 10, 2013 for possession of an explosive device!

WEST – Bryce Reed, a volunteer EMS worker who frequently talked with the media during the aftermath of the West explosion, was detained and faces a charge of possession of a destructive device.
Reed, who served as a volunteer EMS worker for West, was arrested Thursday morning and is being held at the McLennan County Jail.

Sources familiar with the case said Reed was in possession of possible bomb making materials. He is scheduled to appear before a federal magistrate judge Friday morning in Waco.
At this point, agents do not believe there is a connection to the fertilizer plant explosion that occurred on April 17 in West and killed 15. LOCAL SOURCE.

Just when you think the news could not get any weirder, this happens!