Justin Bieber better change his mind and change it quick! Reports coming out of Germany, the place that quarantined his pet money, say the singer called authorities to tell them to keep the monkey! As in, FIND IT A NEW HOME! I guess Justin didn’t want to pay the few thousand euros due for his little buddy’s upkeep, because he sent them the required written instructions telling them to give the animal away! THAT’S PLAIN WRONG! 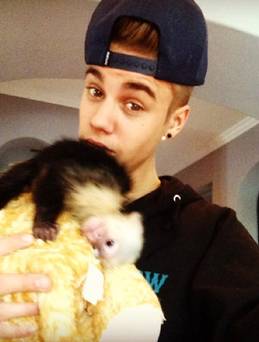 JUSTIN Bieber has reportedly decided to give up his pet monkey which has being held in quarantine in Munich since the singer arrived there last month as part of his world tour. German authorities have said they were contacted by the singer’s management in New York asking them to find a new home for the animal. When the singer arrived in the country last month on his private jet he had no papers for the monkey, leading German customs to place the animal in quarantine. They had given Bieber until May 17th to reclaim the monkey, along with paying the thousands of euro due for his upkeep, or send them written instructions to give the animal away.

Talk about monkey trouble! Animal rights activists are going to have a field day with this one!