Megadeath Vs Men’s Warehouse ‘I Absolutely Guarantee It’

Dave Mustaine, frontman for Megadeath has launched an online protest against the Men’s Warehouse, I absolutely guarantee it. 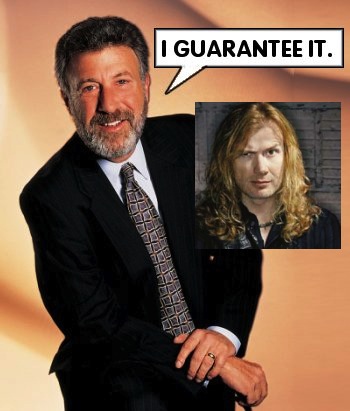 Seems Dave is pissed off that the Men’s Warehouse dropped the ball on a gift certificate destine for the heavy metal guitarist’s tour manager.

“I really think that it sucks when people make false claims, that they don’t care to make good on a problem that is clearly their fault, and with all of the ‘ABSOLUTELY GUARANTEE IT’ crap I just had to say something,” wrote Mustaine.

Apparently, Dave purchased a gift card from Men’s Warehouse as a gift to his tour manager, however, nine days later, Christmas coming gone and the guy never got his gift card, he absolutely guaranteed, he got nada.

“I for one, will never set foot in a Men’s Warehouse, even for shelter from a blizzard,” wrote Mustaine. “I absolutely GUARANTEE it.”

“Dave, thanks for reaching reaching out to us on Facebook,” the social media representative wrote. “We apologize for the delay in receiving your gift card and agree that the delay is unacceptable.”