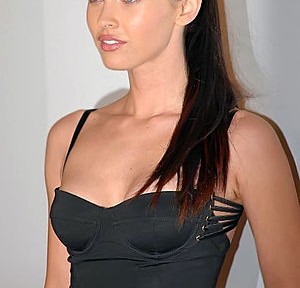 Megan Fox is a dream come true- not for acting, but a dream come true as in she’s like ‘Lisa’ from “Weird Science”. It took 2 smart, nerdy kids to dream up the perfect girl, combining various pictures of ‘favorite’ body parts from magazines, fed into a computer that creates a human, and out comes Megan Fox. Fox may lack the acting skills, but according to Hollywood, she’s the perfect fit for being a poster beauty queen.

She models for high-end Armani makeup and underwear, her movie and TV scenes mostly consist of her in a bikini or underwear [see that story HERE], which means that her beauty secrets just might matter.

Fox tells InStyle Britain that she doesn’t wear makeup unless she is working, or goes out on a date with husband Brian Austin Green. She says when she does wear makeup on her own time, she just wears a tinted moisturizer, lip gloss, and a bunch of mascara.

So how does Fox get that ‘glow’? She did not mention that her sex life gives her a nice ‘glow’, but she said she gets an oxygen facial once a week. Fox says ‘it’s good to steam the skin to get the toxins out’.

Is that even good to get a facial that often?!