Heads Up! 6 Ton Satellite to Hit Earth Next Friday 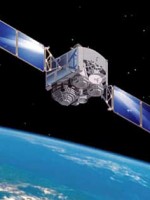 Sooo, be on the lookout around September 23rd, because a 6 1/2 ton satellite might crash on your head. Well, not all of the 6 1/2 tons will hit you at once…

According to NASA, they said they are unsure where the retired “UARS” satellite is going to land! Luckily, instead of the whole satellite hitting the earth at once, it is going to get cooked by the high temperatures, and fall apart during it’s reentry. NASA thinks the space junk is going to fall within a 500 mile radius. They have no idea if this space junk is going to hit you, your house, or just land in the middle of an ocean.

6 TON MONSTER TO RAIN DOWN FRIDAY

To make you feel better about this scary thought, NASA and ‘other scientists and specialists’ agree that the chances of the debris crashing onto an area with living people is a “1 in 3,200 chance”. Really guys!? This sucks. To the bomb shelter! Wait, whoever is reading this can I come over and chill in YOUR bomb shelter cuz I don’t have one :(.