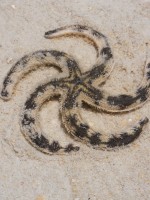 echinoderm, fl, florida, ocean, panama city beach, pcb, Photos, pictures, sea star, shore, starfish, washed up
My mother and I were taking a dip into the Panama City Beach ocean, when we spotted something in the ocean, washing up near the shoreline. We took a closer look and realized it was a creature of some sort! So we got a plastic cup, and scooped the lifeless creature up to see what it was. We established that it was a black and white spotted starfish that had died… so we thought…

We started taking close-up photos of what we thought was a deceased starfish. It did not move initially, but then a few minutes passed, and we saw a few of it’s tiny tentacles move!

As soon as we saw a few tentacles move, people were surrounding us, asking us what it was! In this moment I knew we had to get the starfish back into the water- we had to get him further out in the ocean to stand a chance at life. 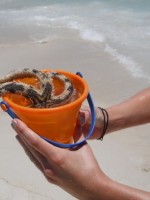 I ran over to some kids with sand castle buckets and asked them if I could borrow a bucket to save the starfish, and they complied. I filled the bucket with ocean water and put the starfish inside. People wanted to see the famous starfish, take photos with him and kids wanted to hold him, but I had to cut everyones wishes short so we could save his life in time! I took Mr. Starfish in the bucket, went as far as I could into the ocean, whisked him into the deep ocean, and set him free. 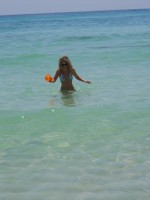 I don’t know anything about these beautiful creatures, but I had a feeling that he got caught up in the waves, which pushed him up near the unfriendly shore, so he needed to be set further out in the ocean so he could survive easier. Starfish do not seem like they are strong swimmers- they glide with the current, and they are meant to stay away from the deadly shore.

I looked around on the Internet to see if I could find which breed of starfish we found, and there was no photo of his kind! I did learn that starfish are ‘echinoderms’, who live up to 35 years in the wild, they do not have brains nor blood, and they breath by filtering ocean water in and out of them. What an amazing experience!