Sahara has spent the last week with Bieber at his amazing Hawaiian villa. END_OF_DOCUMENT_TOKEN_TO_BE_REPLACED

A rather embarrassing spelling mistake on each and every one of them! The t-shirts printed these words: “Many are the plans in a person’s heart, but it is God’s purose that prevails.” END_OF_DOCUMENT_TOKEN_TO_BE_REPLACED

Justin Bieber cried after performing his new single “What Do You Mean?” at the 2015 VMAs, leaving many to wonder, what’s with all the waterworks?

We would love to think the Biebs was overcome by the emotion, but as The Who put it, we won’t get fooled again, we know how these celebrities think, and it’s always calculated.

After killing it with the dance moves as per usual and pulling a short aerial stint a la Pink, the Biebs broke down in tears END_OF_DOCUMENT_TOKEN_TO_BE_REPLACED 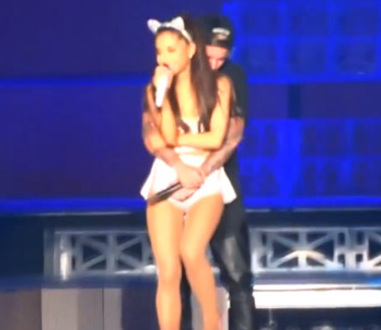 Bieber made a surprise appearance at Grande’s concert at the Forum in L.A. Wednesday, where the two performed “As Long As You Love Me.” END_OF_DOCUMENT_TOKEN_TO_BE_REPLACED

Miley Cyrus posted this teaser for her upcoming “Adore You” music video on Instagram. The 21-year-old singer is sticking to raunchy ways, at one point sticking her hand down! 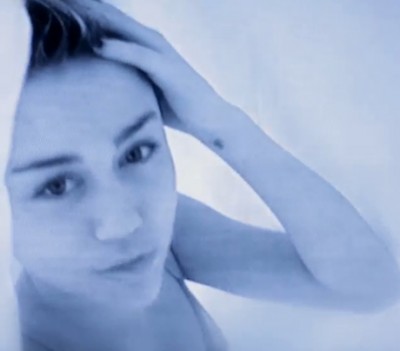 Click more below to check out the clip below!

How many ways can Rihanna think of to demoralize Chris Brown? After sucking Brown back into the fold, emotionally speaking, Rihanna is now meticulously cutting off his male pride, bit by bit, by posting these pictures of her kissing some random and totally cute guy named Justin LaBoy.

The 25-year-old singer was snapped kissing another man, who calls himself Justin LaBoy.. I don’t know if that username is props to Justin Bieber and this guy is trying to say that he’s gay? I do know one thing, Chris Brown unfollowed Rihanna from Twitter after these pictures were posted and FOLLOWED his ex Karrueche Tran, while Riri followed brown’s nemesis, Drake.

“Me and the wife @Badgalriri out here tonight,” a UK mag quoted LaBoy as saying.

“Just remember to keep ya muthaf**kin head up.”

Talk about childish! If it wasn’t for all the money and flashy cars you would think these guys were 11 years old.

Justin Bieber is calling for “meaningful legislation” in taking steps to protect the lives of celebrities, this in the wake of the death of a paparazzi…

Bieber is calling on lawmakers to crackdown on paparazzi though it was a paparazzi that got killed. Wait, shouldn’t be cracking down on celebrities?

A Denver, CO police officer has been accused of beating his girlfriend, and he says the reason why he fought back, was because she hit him and bit him first.Justin Bieber Doll Police Officers Girlfriend Attacks Him with Justin Bieber Doll!

The policeman has claimed that his girlfriend first attacked him with a Justin Bieber doll. He says that the Bieber Doll injured his foot. The girlfriend kicked him and bit him as well, but the Bieber doll may have got the best of him.

Authorities arrested Officer Michael Nuanes Jr. for assault charges. He was released from jail on $1,500 bond. No charges were filed against the woman. Meet Sofia, the new Disney ‘kid’ princess. Sofia, a blue-eyed brunette, is Disney’s new cartoon character, and she ought to appeal to little girls from 2 to 7 years old.

You will obey her commands.

Miley Cyrus got a Bob Marley themed cake for her Birthday, and admitted to being a stoner…

Miley says in this video at her Birthday party at the Roosevelt Hotel, “You know you’re a stoner when friends make you a Bob Marley cake. You know you smoke way too much f***in’ weed.”

Kelly Osbourne, with the bluish hair, standing right next to her, made a joke about Miley smoking Salvia out of a bong at her Birthday last year. She said, “I thought salvia was your problem.”

According to comments on the video, her fans say that the Marley cake was a joke and so was Miley’s comment about being a stoner.