December 4th 2011, Star Trek fans Terrance Huff and Jon Seaton are stopped illegally after a Star Trek Exhibition for suspected drug transportation in Collinsville, Illinois. Award winning filmmaker Terrance Huff does a breakdown of an illegal traffic stop and subsequent search involving a K9 Officer who has a questionable past. The dog search begins 9:50 and is followed by evidentiary video.

Please do not post personal/private information about Michael Reichert (or anyone else) in the comment section. Posts advocating violence will be deleted immediately. This video may be used for news purposes and redistributed by embedding with youtube code from this page only. This video is not for profit and is intended for public information purposes only.

An online campaign, that pushed Mattel to make a bald Barbie in light of kids who have hair loss from alopecia or chemotherapy, got so much attention, now Mattel is going to create ‘her’.

The campaign, called “Beautiful and Bald Barbie! Let’s see if we can get it made” reportedly convinced Mattel to create this bald ‘friend of Barbie’ doll, by getting so much attention and ‘likes’ on their Facebook page.

Bald Barbie won’t just come ‘bald’ in a box says CBS News, but she will have wigs, hats, scarves and other accessories to give children “a traditional fashion play experience.”

CBS also reports that Bald Barbie is going to be a V.I.P. doll, as she will not be sold in stores, but “will [only] be donated to children’s hospitals and the National Alopecia Areata Foundation.”

Frohman: “You know, he was very stoned, yet he was coherent on some level and gone on another level,” Frohman adds. “I had met people like that before, but this was unique because I was shooting someone with these glasses on. He wouldn’t take the glasses off, so I couldn’t really make eye contact easily.”

You are about to witness a huge robot playing the damn bass! Proof that impressionist art is alive and well! And the best part? The bassist can only play two songs… Artist Kolja Kugler says “I want to build a band made out of robots.

This is the first member of the band, the bass player. It is made out of scrap metal, 99 percent of it, old parts which I have found. The scrap metal sculpture was made from 250 kilograms of scrap metal and truly represents the future of heavy metal may just be that- metal.”

We all have a different reason to run. Watch David Beckham, Lionel Messi, Derrick Rose and Katy Perry go all in on their run. Whatever the reason, wherever you are, go farther and enjoy every stride.

All you have to do is LEAVE A COMMENT EXPLAINING ‘WHY YOU LIKE LMFAO’. The best answer in my opinion, will win. Hurry up and leave a comment below!

Some dude in Kansas bought a few lottery tickets and then got struck by lightning… No metaphor. I’m sure you’ve heard your odd of winning the lotto compared to getting hit by a bolt of lightning well this guy proved it’s true.

Bill Isles, 48, bought three tickets trying to win $640 million lottery Thursday at a Wichita, Kansas grocery store and on his way to the car he commented to a friend: “I’ve got a better chance of getting struck by lightning” than winning the lottery.

This new iPhone ‘app’ that came out recently called “Girls Around Me”, was created to find girls near the user’s location. The app, which was shut down yesterday by officials at Foursquare, almost became a girl’s worst nightmare, as it not only let curious men (or even women!) know that you checked in at ‘Super Target’, but it also let them peep into your Facebook profile details.

When users logged into Girls Around Me, the app dipped into their phone’s ‘location services’ to locate the user first. Then, a Google map came up, showing what area of town the user was in, and then the map pinned spots where various local girls were located. The girls who had appeared on the map, had ‘checked-in’ via Foursquare, which is built to state one’s location onto their Facebook page, but the girls never checked-in at Girls Around Me. The girls’ profile pictures would be pinned on the map, to whatever spot they check in at. If there were multiple girls at the same location, the app showed the number amount of girls at that location in a red bubble. If the user clicked on the red bubble, they could see pictures of all the girls.

The app got even more in depth, as it allowed users to feed into their curiosity about a specific girl listed, or even ALL of them. Users were peering into the girls’ Facebook profiles through simply clicking the their picture(s) on the map, and would surf through girls’ information and photos.

Just as the app began to get popular, officials at Foursquare got wind that this app could be a violation of privacy, and sure enough, it was. The app was being fueled by using Foursquare’s public ‘API’ (Application Programming Interface) information. Foursquare’s rep Laura Covington, exclusively tells CultofMac.com that Girls Around Me was “in violation of our [FS’s] API policy” and that Foursquare “shut off their [GAM’s] API access”. Covington also told CultofMac that they were worried about the ‘overview of locations’ saying, “We have a policy against aggregating information across venues using our API, to prevent situations like this where someone would present an inappropriate overview of a series of locations.”

What I think Covington is really trying to say, is that officials at Foursquare began to ponder the possibility that ‘profile stalking may not end at the photo surfing’. They were also probably worried that Girls Around Me users may take things to the next level, and go see the girl(s) in person. The chosen girl(s) would never know that their ‘new friend they just made’, was someone who already knew everything about them, as that ‘new friend’ stalked on the app just moments ago- that’s how the stalker found the victim!

Foursquare’s API info, in combination with ‘public set’ Facebook profile information, makes apps like Girls Around Me possible. Peoples’ information is picked up by apps like this, and next thing you know, you meet a ‘new friend’ at a club, that has EVERYTHING in common with you. Wow, it was like your new friend ‘already knew you before they met you!’

The majority of girls who wound up on Girls Around Me, didn’t know they were on there. They just thought that they were checking into Foursquare, showing off to their friends on Facebook that they’ve checked into a store, restaurant, club or wherever! The reality is, they weren’t thinking at all, when they kept their Facebook profiles set to ‘public’ and not ‘private’.

This is a real product called “Picnic Pants” LOL! 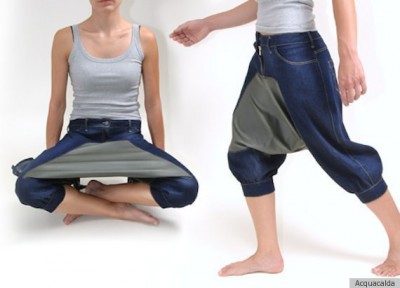