Northville, Detroit doctor, Dr. Jumana Nagarwala, was charged on Thursday with performing secret (and illegal,) female genital mutilation on little girls as young a 6 years old. Muslims from across the world have the disgusting procedure performed on their daughters to reduce sexual pleasure and promiscuity.

According to documents filed in federal court, Dr. Jumana Nagarwala performed the procedure on young girls between the ages of 6 and 8 years old. A doctor in Minnesota enlisted to help investigate the crime performed an examination on the girl pursuant to a search warrant. The doctor said the girl’s genitals were not normal and observed scar tissue and healing lacerations.

The federal document claims that children from other states were brought to Dr. Nagarwala to undergo the operations. Two victims from Minnesota stayed at a hotel in Farmington Hills in February. One of the girls is 11 years old and told authorities that they came to the Detroit area for a ‘special’ girls trip, and when they arrived at the hotel she and the other young girl had to go to the doctor because ‘their tummies hurt’. END_OF_DOCUMENT_TOKEN_TO_BE_REPLACED

END_OF_DOCUMENT_TOKEN_TO_BE_REPLACED 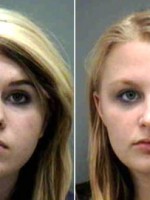 Two teen girls from Florida have been arrested for creating fake Facebook profiles in the name of a fellow high school student. The naughty girls placed obscene photos on the pages, including one showing their classmate’s head atop the body of a nude prepubescent girl’s body with an erect penis next to the head.
END_OF_DOCUMENT_TOKEN_TO_BE_REPLACED

FORT PIERCE, FLORIDA – Monday November 8, 2010. David Cassidy, former star of the 1970s TV show The Partridge Family, was arrested on Wednesday evening after blowing .14 on the breathalyzer. The 60-year-old former teen heartthrob was caught allegedly driving recklessly by Fort Pierce, and was caught with a half-empty bottle of bourbon in his Mercedes. Police said Cassidy eventually admitted to drinking of a glass of wine at noontime, and that he also took a painkiller for his back pain. Cassidy was taken to jail for DUI and released on bail Thursday morning. The incident might affect Cassidy’s appearance in the next episode of ‘The Celebrity Apprentice.”