This 3D projection was displayed on the Meiji Memorial Picture Gallery during the Japan premiere for the film Tron:Legacy 3D in Tokyo, Japan, on November 30, 2010. Space-themed Christmas lights hang over Carnaby Street on November 29, 2010 in London, England. Despite the global economic downturn and cold weather, high street retailers have generally been experiencing good Christmas trading which has been attributed in part to January’s rise in VAT from 17.5% to 20%.

SIERRA BLANCA, TEXAS – Monday November 29, 2010. Willie Nelson was arrested for allegedly possessing six ounces of marijuana last Friday at a Border Patrol checkpoint in Texas. The music legend was on his tour bus traveling from California to Austin where he was then detained. He was booked into the Hudspeth County Jail on a $2,500 bond and posted shortly after.

Remember way back when the government was investigating actors and musicians because they thought they were “Commies?” Well the era of this type of closed door investigations and harassment has reared its ugly head again.

This time the target was Mark Ruffalo. After promoting “GasLand,” a documentary about natural gas drilling and how it affects our water supply, Ruffalo was added to a terror watch list.

Ruffalo’s response to being placed on a list usually reserved for suspected terrorists was “It’s pretty f**king funny,” however, funny may not the operative word to describe being placed on this type of damming list. The implications could be extremely damaging to his career especially since government agencies and film giants are working in lockstep to shut down websites that contain copyright infringements, in other words, if Ruffalo is in hot water for voicing his concern there is a good chance honchos in the entertainment industry would not voice their opinions in defense of him which could lead to Ruffalo being added to another kind of list, a modern day blacklist.

Brad Pitt, his leather pants and Angelina Jolie were photographed arriving to the ‘Megamind’ Paris premiere on November 29, 2010 in Paris, France.

Ronnie Wood of the Rolling Stones and girlfriend Ana Araujo watch with former Argentinian footballer Diego Maradona (L) during the men’s final between Rafael Nadal of Spain and Roger Federer of Switzerland during the ATP World Tour Finals at O2 Arena on November 28, 2010 in London, England.

Angie from Full Throttle Saloon’s, Angieland, is one of a kind. In Angie’s own words: 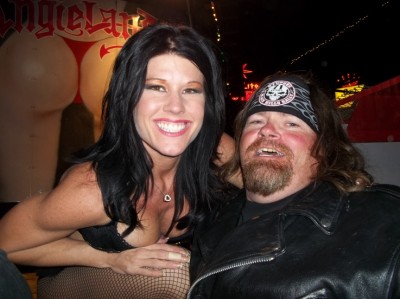 Smootchin’ It,
Pinchin’ It,
Patting It,
Spankin’ It,
Loving It,
Hittin’ It,
Hating It, END_OF_DOCUMENT_TOKEN_TO_BE_REPLACED

Are you a man that suffers from hypogonadism, a disease which produces low testosterone levels? Do you have symptoms such as erectile dysfunction, low sexual desire and performance? Well then this Australian testosterone pit cream is for you! I sound like a sales gimmick LOL!

An Australian company has announced that it will sell the world’s first armpit testosterone lotion in American stores next year, since just receiving approval from the US Food and Drug Administration.

“Axiron”, an anagram for “iron ax”, is the first testosterone replacement therapy to be applied in the armpit, with current treatments including a gel for the upper body and regular injections. The drug will only be available by prescription. Axiron will be sold in 2011 in the US, which has the world’s largest market for testosterone replacement, worth about $1 billion a year.

Wonder why it’s the Americans who need such a large amount ($1 billion worth) of testosterone replacements? Bad eating habits! Fast food and microwaved food do not help the libido guys! Workout and cook healthy, homemade food! Lay off of the booze and pot too!