Legendary comedian, Don Rickles, who throughout his long career earned the nicknames “The Merchant of Venom” and “Mr. Warmth,” has died. He was 90.

Rickles passed away on Thursday at his home in Los Angeles surrounded by family. His cause of death was  reportedly kidney failure, according to spokesman, Paul Shefrin. For more than half a century, on nightclub stages, in concert halls and on television, Mr. Rickles made outrageously derisive comments about people’s looks, their ethnicity, their spouses, their sexual orientation, their jobs or anything else he could think of. END_OF_DOCUMENT_TOKEN_TO_BE_REPLACED

Christina Milian is busy filming her new pilot for “Grandpa”. But not too busy to host a special Young Money visitor on-set. It seems Lil Wayne stopped by and maybe he is even appearing in the pilot too?

Guess we’ll have to wait to find out if Wayne is a walk-on or a series regular… Grandpa also stars legend comic, Don Rickles and NFL star and commentator, Deion Sanders. 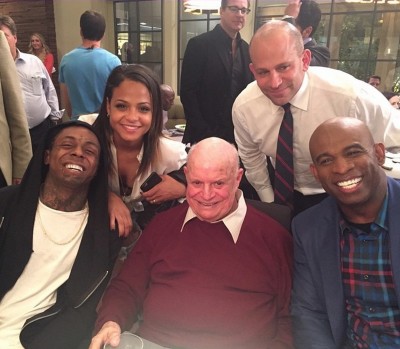