‘About Face!’ Prince Harry Caught On Video Appearing To Tell Meghan To ‘SAA!’

LONDON, UK. (THECOUNT) — Prince Harry, aka, the Duke of Sussex, was caught on video advising his bride, Meghan Markle, to square off, as she stood in front of him on the balcony of Buckingham Palace for Trooping the Colour last Saturday.

Meghan, 37, is seen standing in front of Harry, 34, on the balcony of Buckingham Palace as the Duchess turns her back to speak to her him. That prompted Harry to utter a few brief orders to stand at attention.

Harry also pulled a few frustrated facial maneuvers during the process, one of which, did not seem to delight the Duchess.

The exchange sparked widespread speculation on social media over what was said. Analyzing the footage (seen), lip reading expert Jacqui Press concluded Prince Harry said to Meghan, ‘yes, that’s right’ when she looked at him the first time, before adding: ‘Turn around… Look,’ when she turned back to him a short time later. The exchange came moments before the start of the national anthem, according to DailyNews on Friday.

Click on the image below to jump to the video: 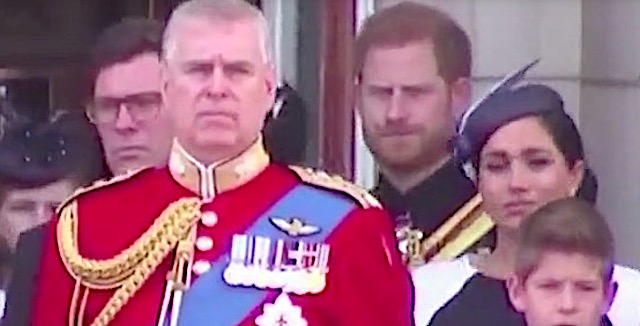 Geo quick fact: London, the capital of England and the United Kingdom, is a 21st-century city with history stretching back to Roman times. At its centre stand the imposing Houses of Parliament, the iconic ‘Big Ben’ clock tower and Westminster Abbey, site of British monarch coronations. Across the Thames River, the London Eye observation wheel provides panoramic views of the South Bank cultural complex, and the entire city – wikipedia.