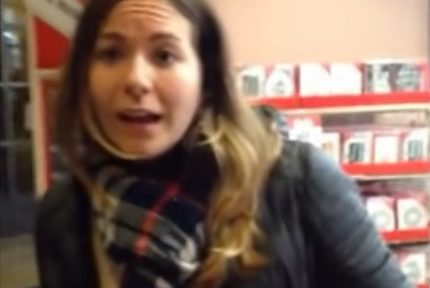 A woman who was recorded going off on a Donald Trump tirade at a Michaels craft store in Chicago after being asked by store employees to pay for a reusable bag, also went off on Peet’s Coffee Shop employee back in July.

The unidentified woman in the now viral video was also caught on video berating Peet’s Coffee Shop employees back in July. A link to that video is listed below. During the Michaels rant, the irate customer said she was being discriminated against over (among other reasons,) voting for President-Elect Donald Trump. The incident took place in one of most liberal neighborhoods of Chicago.

“Yes, I voted for Trump, so there. You want to kick me out because of that? And look who won,” the woman said. “I was just discriminated against by two black women and you being a white woman and you literally thinking that’s OK,” the woman said.

In a response to posters contacting Sinai on Facebook, the company wrote, “Thank you for your concern. Prior to this event, this individual ceased employment at Sinai Health System and her views do not represent our organization. Sinai is committed to embracing diversity.” Michaels said, “We regret that our customers and team members were affected by this unfortunate incident and are grateful for the leadership of our store team in working to resolve it without further escalation.”

The company said it does not tolerate racism or discrimination against employees or customers, the news site reports. h/t heavy Chicago Police were called to the store, but did not have any information about the incident when contacted by the news site.

After the video went viral, a second video, filmed in July at a Peet’s Coffee shop was posted to Youtube. The 1:48-long video shows her in a confrontation with the “floor manager.”