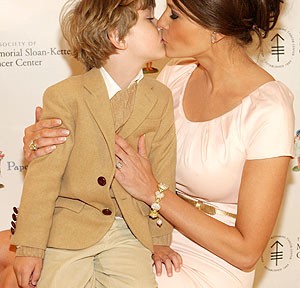 FROM THE AP STORY: “The details of Mrs. Trump’s early paid modeling work in the U.S. emerged in the final days of a bitter presidential campaign in which her husband, Donald Trump, has taken a hard line on immigration laws and those who violate them. Trump has proposed broader use of the government’s E-verify system allowing employers to check whether job applicants are authorized to work. He has noted that federal law prohibits illegally paying immigrants. Mrs. Trump, who received a green card in March 2001 and became a U.S. citizen in 2006, has always maintained that she arrived in the country legally and never violated the terms of her immigration status. During the presidential campaign, she has cited her story to defend her husband’s hard line on immigration. The wife of the GOP presidential nominee, who sometimes worked as a model under just her first name, has said through an attorney that she first came to the U.S. from Slovenia on Aug. 27, 1996, on a B1/B2 visitor visa and then obtained an H-1B work visa on Oct. 18, 1996. The documents obtained by the AP show she was paid for 10 modeling assignments between Sept. 10 and Oct. 15, during a time when her visa allowed her generally to be in the U.S. and look for work but not perform paid work in the country. The documents examined by the AP indicate that the modeling assignments would have been outside the bounds of her visa. It is highly unlikely that the discovery will affect the citizenship status of Mrs. Trump. The government can seek to revoke the U.S. citizenship of immigrants after the fact in cases when it determines a person willfully misrepresented or concealed facts relevant to his naturalization. But the government effectively does this in only the most egregious cases, such as instances involving terrorism or war crimes. h/t ap Has the election really come down to this? Attacking a candidate’s wife? All compliments of the party that professes equality. All you have to do is read the Wikileaks emails to learn the origin of this trash.