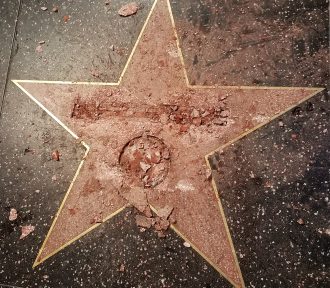 Speaking to Deadline, the man said his name was Jamie Otis. He said he originally intended to remove Trump’s star completely to auction it off next month in New York to raise funds for the women who have recently come forward to accuse Trump of sexually assaulting them over the decades. In the past few months, 11 women have claimed the GOP POTUS candidate groped or otherwise attempt to get intimate with them. At a rally earlier this week, Trump told supporters the accusers were not telling the truth and that he would sue them after the November 8 election. The removal effort was not a success today, with the star smashed into pieces but not leaving the ground. Usually one of the most crowded spots in L.A. during the daytime, there was almost no one around in the pre-dawn hours as the vandal attacked Trump’s star. Moving fast and with apparent planning, the defacer attracted little attention except from a few passers-by. There was no LAPD presence in the usually well-patrolled tourist spot just across from where Jimmy Kimmel Live! is filmed most weekdays. h/t deadline This is not the first time Trump’s star has been defaced, last year someone spray painted the iconic Hollywood nod.