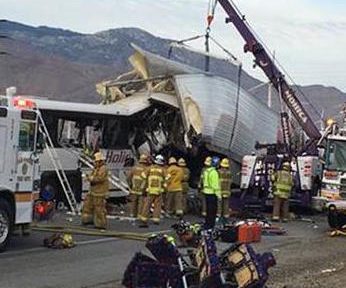 All westbound lanes of the highway are closed and traffic is being diverted, according to the California Highway Patrol. Reports say at least 21 victims have been taken to Palm Springs-area hospitals. Photos show the front of the passenger bus pushed into the semi-truck’s trailer. CHP said “the intrusion into the bus compartment is significant.” Firefighters were using ladders into the bus’ windows to pull out victims. h/t abc7