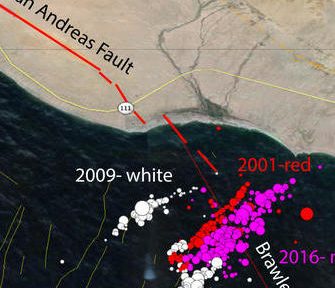 A swarm of over 200 earthquakes, measuring 4.0 and under, occurring deep under the Salton Sea began rupturing near Bombay Beach, and continued for more than 24 hours.

The quakes have garnered intense concern among seismologists who noted the seismic events marked only the third time since earthquake sensors were installed there in 1932. The quakes occurred in one of California’s most seismically complex areas. They hit in a seismic zone just south of where the mighty San Andreas fault ends. It is composed of a web of faults that scientists fear could one day wake up the nearby San Andreas from its long slumber. The San Andreas fault’s southernmost stretch has not ruptured since about 1680 — more than 330 years ago, scientists estimate. And a big earthquake happens on average in this area once every 150 or 200 years, so experts think the region is long overdue for a major quake. h/t latimes The swarm temporarily increased the likelihood of a major quake in Southern California.