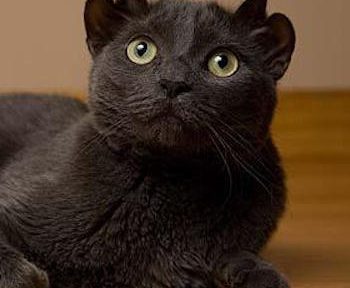 Could it be Gotham’s own Cape Crusader has shaken his orphaned status once and for all? Actually Batman was adopted in Pennsylvania this week but it’s not the Dark Knight that uses a fully loaded utility belt while responding to a bat signal. No, instead it is a rare breed four eared cat named Batman.

The cat was brought into the Humane Society as a stray back in July and needed to be treated for an upper respiratory infection before being placed up for adoption. The facility was worried that no one would want to adopt a cat with a genetic mutation, compounded with the fact that black cats usually stay at shelters longer. These facts alone made the prospect of finding Batman a forever home slim.

Although Batman has a very rare congenital defect, it doesn’t affect his hearing or his ability to be affectionate. The doctors and staff that cared for him said he was cool, sweet and friendly.

However, it seemed fate was on this four-eared feline’s side because he was adopted in just a few hours of being showcased on Facebook. A young girl, who is a huge superhero fan couldn’t wait to make Batman a part of her family. Though Batman is a rare find, he is not the first four-eared cat to be seen. These types of genetic mutations have been recorded as early as 1938 in Ohio.

Bruce Wayne can rest easy tonight as the four-eared, four legged, whisker faced feline is not trying to dethrone the masked Bat. I’m sure after roaming the streets as a stray, this 3 year old kitty is only looking for some kibble and cuddles henceforth.