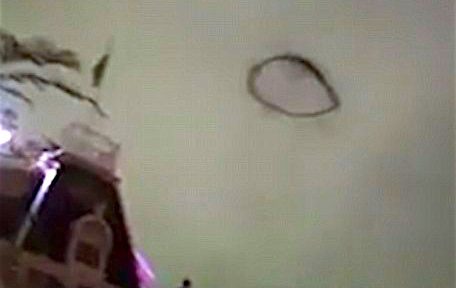 A freaky black ring shaped UFO is being dubbed a possible ‘alien portal’ after being spotted spinning above Disneyland in Anaheim.

A video depicts the smoke-ring-like object hovering above the Magic Castle at the popular theme park in California on April 27. Baffled visitors watched it float by, yelling: ‘What is that?’ while a conspiracy theorist said it would cause families to worry of an alien invasion. A bizarre black ring (pictured) has been filmed floating over the skies in Disneyland in California, sparking theories of an ‘alien portal’ In the footage witnesses were heard exclaiming in shock as the mysterious ring floated above them. The filmmaker, Kyle Hawkins, said: ‘No idea what this could be… Walking up main Street at Disneyland, following the parade. ‘It was a windy night, couldn’t have been a smoke ring. ‘Everyone watched it in fear/confusion. I half expected an alien portal to open up through this ring as we were gazing up in disbelief…The strangest thing I’ve ever seen. ‘I yanked my phone out to record as soon as I saw this thing, then immediately uploaded to YouTube. This is raw footage, apologize for shakiness.’ h/t dailymail