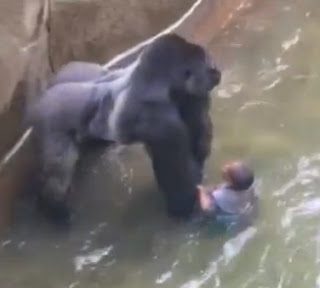 Michelle Gregg, the mother of a 4-year-old boy who fell into a gorilla enclosure at the Cincinnati Zoo is speaking out for the first time since the scary incident happened.

Gregg, 32, took to Facebook to try and explain her side of the ordeal after receiving an avalanche of hate (including death threats,) on social media. Zoo directors ultimately shot and killed the 17-year-old gorilla, named Harambe, fearing for the child’s life. “I want to thank everyone for their thoughts and prayers today. What started off as a wonderful day turned into a scary one. For those of you that have seen the news or been on social media that was my son that fell in the gorilla exhibit at the zoo. God protected my child until the authorities were able to get to him. My son is safe and was able to walk away with a concussion and a few scrapes….no broken bones or internal injuries. As a society we are quick to judge how a parent could take their eyes off of their child and if anyone knows me I keep a tight watch on my kids. Accidents happen but I am thankful that the right people were in the right place today. Thank you to everyone that helped me and my son today and most importantly God for being the awesome God He is.”

Some critics are calling for Gregg to be prosecuted for negligence. Cincinnati Police Lieutenant Stephan Saunders said that he is not aware of any intention to press charges. Many animal lovers maintain Harambe would have not killed the child because he showed no signs of aggression, for example, beating on his chest.