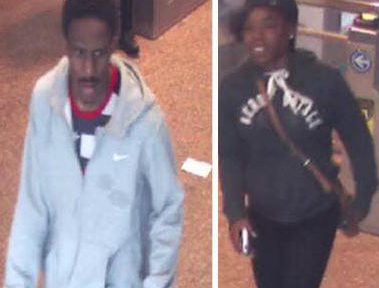 Police just released these photos of a pair of male and female suspects who brutally attacked DePaul University freshman student, Jessica Hughes, after she refused to hand over her iphone.

Hughes, 19, was minding her own business while riding the Blue Line this week when she was attacked. She sustained multiple injuries during the beating including a broken nose and black eye. “He grabs me, pushes me to the floor, and he started beating on my head repeatedly,” she said. “He grabs my hand, looks me in the eye and bites my hand.” According to Hughes, the woman joined the attack, breaking her nose. Two men were also in the train car with her, she said, but they simply watched the attack happen. “He kept beating me,” she said. “I yelled for help and no one came.” Police say a man and woman approached the victim and attempted to take her cell phone by punching her with closed fists, according to a release from the Chicago Police Department. One offender also bit the victim in the hand. The first offender is described as a black male, approximately 25-35 years old, 6′ and 180 pounds, with black hair and wearing a gray hooded sweatshirt. The second offender is a black female, approximately 18-25 years old, 5’6″ tall and approximately 120 pounds. She was wearing a dark-colored ‘Aeropostale’ sweatshirt and black pants. A 19-year-old freshman at DePaul University, Jessica Hughes said she was simply returning home from a morning class when the two people attacked her for her iPhone, all while witnesses sat and watched. She said she suffered a black eye, a broken nose and bite marks in the attack. h/t nbcchicago Police ask urging anyone with information on these two scumbags to contact Area North detectives at 312-744-8263.

DePaul University is the largest Catholic university in the nation and the largest private institution in Chicago, serving nearly 25000 students.