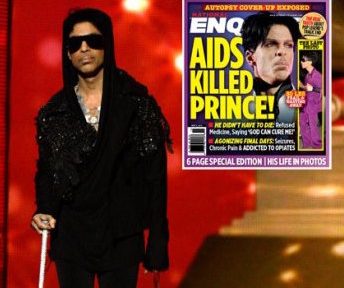 Surfacing reports are claiming Prince died from complications of the AIDS virus.

The singer was diagnosed with AIDS six months before his death but refused medical treatment, believing he could be cured by the power of prayer, The National ENQUIRER is reporting. The new issue of The National ENQUIRER — on newsstands now — has the shocking secret story behind the music legend’s sudden death! Close friends of Prince have revealed to ENQUIRER reporters the tragic inside story of the “Purple Rain” singer’s desperate fight for life. The ENQUIRER’s bombshell coverage includes tragic details about the troubling personal decisions that ultimately cost Prince his life at the age of 57! This special edition of The ENQUIRER also looks back at Prince’s many loves, and his rivalry with fellow ’80s icon Michael Jackson.