‘Many’ Injured In Amtrak 5 Car Derailment In Kansas 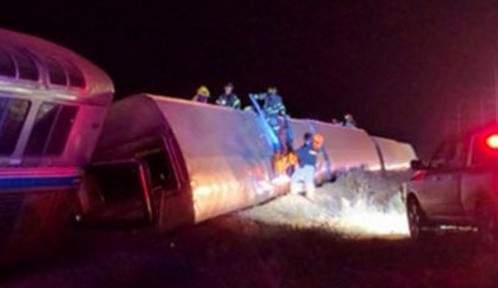 Five Amtrak train cars have derailed while traveling in Kansas, early Monday. As many as five cars could be seen on their side. The accident has resulted in multiple injuries, the state Highway Patrol says. The exact number of victims or their condition has not yet been determined.

In a statement, Amtrak said: “Just after midnight CT, Amtrak Train 4, the Southwest Chief operating from Los Angeles to Chicago, derailed some cars approximately 20 miles west of Dodge City, Kan., on BNSF track. There were approximately 128 passengers and 14 crew members on board. Initial reports are that there are no life-threatening injuries. Local emergency responders are on the scene and an investigation is ongoing.” h/t cbsnews Daniel Szczerba, who says he was a passenger and is OK, told CBS News, “There are many injured being taken to local hospitals.”